The most intriguing feature from WWDC21 was buried deep in the Xcode 13 release notes:

All programs and dylibs built with a deployment target of macOS 12 or iOS 15 or later now use the chained fixups format. This uses different load commands and LINKEDIT data, and won’t run or load on older OS versions.

There isn’t any documentation or sessions to learn more about this change, but we can reverse engineer it to see what Apple is doing differently on the new OSes and if it will help your apps. First, a bit of background on the program that controls app startup.

The dynamic linker (dyld) is the entry point of every app. It’s responsible for getting your code ready to run, so it would make sense that any improvement to dyld would result in improved app launch time. Before calling main, running static initializers, or setting up the Objective-C runtime, dyld performs fixups. These consist of rebase and bind operations which modify pointers in the app binary to contain addresses that will be valid at runtime. To see what these look like, you can use the dyldinfo command line tool.

This means address 0x10748C0C8 is located in __DATA/__got and needs to be shifted by a constant value (known as the slide). While address 0x107595A70 is in __DATA/__const and should point to the protocol descriptor for Hashable[1] found in libswiftCore.dylib

dyld uses the LC_DYLD_INFO load command and dyld_info_command struct to determine the location and size of rebases, binds and exported symbols[2] in a binary. Emerge, parses this data to let you visualize their contribution to binary size as well as suggest linker flags to make them smaller:

When I first uploaded an app built for iOS 15 to Emerge there was no visualization of dyld fixups. This was because the LC_DYLD_INFO_ONLY load command was missing, it had been replaced by LC_DYLD_CHAINED_FIXUPS and LC_DYLD_EXPORTS_TRIE.

The export data is exactly the same as before, a trie where each node represents part of a symbol name.

Portion of the exports trie for Wikipedia

The only change in iOS 15 is the data is now referenced by a linkedit_data_command which contains the offset of the first node. To validate this, I wrote a short Swift app to parse the iOS 15 binary and print each symbol:

The real change is in LC_DYLD_CHAINED_FIXUPS. Before iOS 15, rebases, binds and lazy binds were each stored in a separate table. Now they have been combined into chains, with pointers to the starts of the chains contained in this new load command: 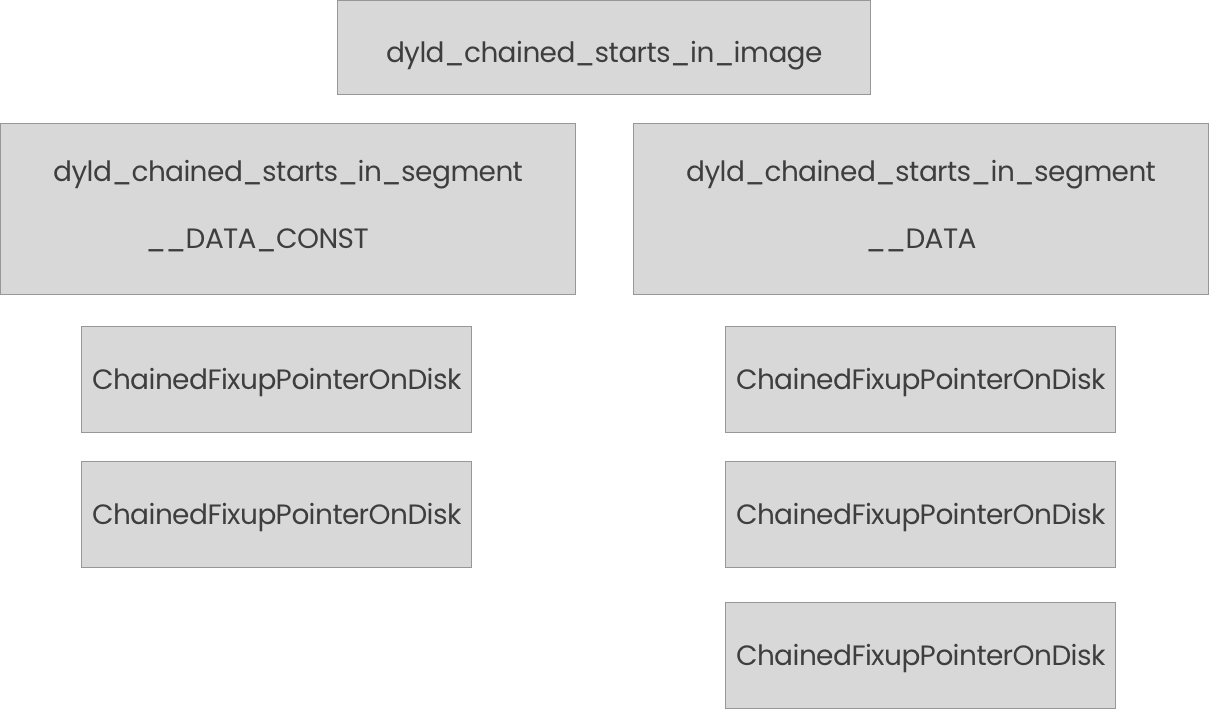 The app binary is broken into segments which each contain a chain of fixups that can be either binds or rebases (there are no more lazy binds). Each 64 bit rebase[3] location in the binary now encodes the offset it points to as well as the offset to the next fixup, as seen in this struct:

This very compact encoding means the entire process of walking the chain can be contained within the existing size of the binary. In my tests over 50% of dyld data’s contribution to binary size is saved since only a small amount of metadata is reserved to indicate the first fixup on each page. The end result was an over 1mb size reduction for large Swift apps.

The source code for this process is in MachOLoaded.cpp with the binary layout in /usr/include/macho-o/fixup-chains.h

To understand the motivation behind this change we have to pay attention to one of the most expensive operations during app startup, a page fault. When code on the filesystem is accessed during app launch, it needs to be brought from the file to memory through a page fault. Each 16kb range in an app binary is mapped to a page in memory. Once the page is modified it needs to stay in RAM for as long as the app is running (known as a dirty page). iOS optimizes this by compressing pages that haven’t been used recently. 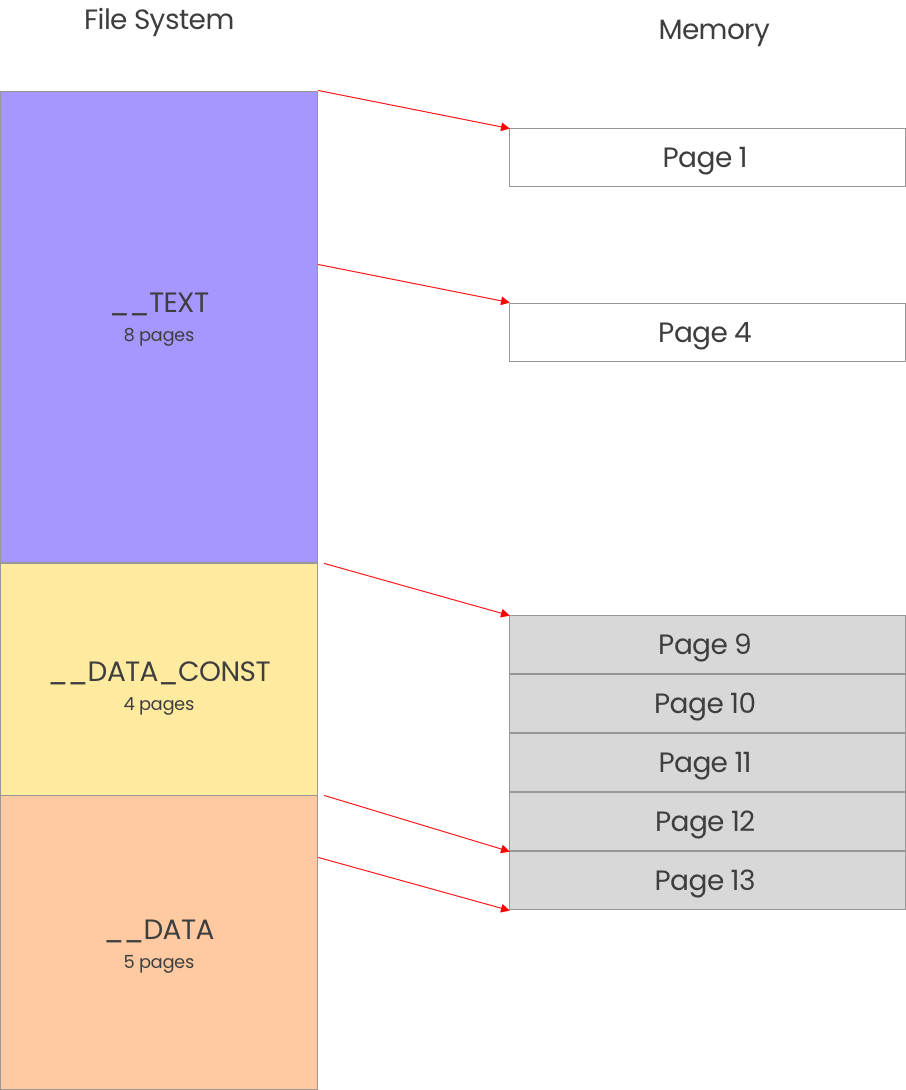 A fixup at app launch requires changing the address in the app binary, so the entire page is marked dirty. Let’s look at how many pages are used by fixups during an app launch:

With the table format, rebases are resolved first, followed by binds. This means rebasing requires many page faults and ends up being mostly IO bound[4]. Binding on the other hand accesses 30% of the pages that rebasing used, effectively doing a second pass through memory.

Now in iOS 15, the chained fixups group all changes for each memory page together. Dyld can now process them faster with one pass through memory, completing rebases and binds at the same time. This allows OS features like the memory compressor to take advantage of the well known ordering, not needing to go back and decompress old pages during binding. Because of these changes, the rebase function in dyld becomes a no-op:

Overall this change mostly impacts anyone reverse engineering iOS apps and exploring the details of the dynamic linker, but it’s a good reminder of the low level memory management that impacts performance of your apps. While this change only takes effect if you’re targeting iOS 15, remember there’s still plenty you can do to optimize app startup time:

[2] Exports are the second piece of a bind. One binary binds to symbols exported from its dependencies.

[3] The same goes for binds, a pointer is actually a union of rebase and bind (dyld_chained_ptr_64_bind) with a single bit used to differentiate the two. Binds also require the imported symbol name which isn’t discussed here.